Have you ever thought of using an Alternative to the Google Play Store?

Most of you would have never thought about it.

But you should also consider using any reliable and well-reputed alternative app to the Google play store because there are a lot of reasons behind it.

I know Google Play Store is the biggest and the most famous app store out there for Android users, but it lacks something-something that you may need at times – something which you would search on the Google if you never used an alternative app beside the play store.

That is why I am saying you should use any other app which is also cool and good and is secure too.

That is why today I ended up creating this post.

But before we start, I will be covering a few significant topics which will help you to understand the importance of using an alternative app of Google Play store on your smartphone.

Why Should You Use Google Play Store Alternative?

Well, friends, if you have ever searched for some, cools apps like UKTvNow, SnapTube, etc. then you will notice you will not find the app in the Google Play Store.

The reason is that they have strict policies that’s why they have not added the UkTvNow on their apps database. However,` you can download this app from all the alternatives that I have listed below.

There are tons of other cool apps too like Videoder (my favourite app) an app for downloading YouTube videos in a matter of seconds, but it is not on Google Play Store due to the policies of the Google.

However, when we use some cool alternatives of the Google Play Store, then we can get these apps in just one place very quickly and easily.

Now I hope you have understood the importance of using Google Play Store alternatives.

But there is one more question that needs an answer.

Is it safe to use An Alternative App?

This question is a little logical, as we know all the fingers are not equal. So, some play store alternatives out there are excellent in the matter of security while some are OK.

But there is not any store out there which can compete with Google Play Store for security reasons.

Well, I would like to say that the most of the stores that I have mentioned below are good and are secure too. 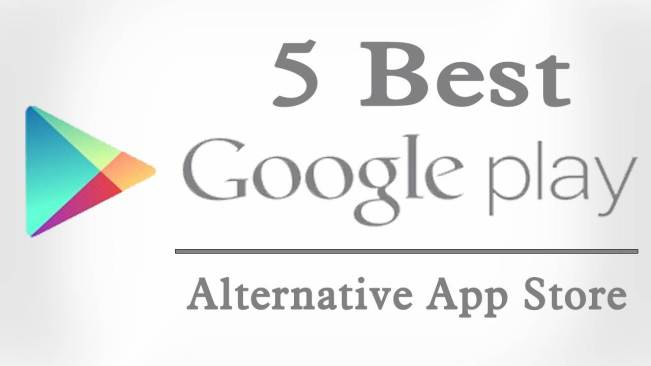 As stated above there are thousands of useful apps that you can use as an alternative to Play store, but I have picked the best one and are listed below.

Aptoide is one of the most popular and the highly recommended app out there. It has been around since the year 2009 and has got a lot of popularity and now millions of people all over the globe use Aptoide.

Aptoide was started as a site in the beginning, and when this idea got attraction the developers converted this site into a full app store, and now it contains 800 thousand apps which have been downloaded for more than 15 million times.

When we talk about security Aptoide stands first after Google Play Store and is also recommended as all the apps here are scanned first and then placed on the site.

APKMirror has also been around there and is very famous for its feature to provide the older versions too. I mean if you don’t like the latest version of an app then you can also grab its later version too. For example, let’s say you love to play Traffic Racer (my favourite game) and the developers have just updated the app and you also updated the app as Google Play Store automatically updates the apps. But you didn’t like it then you can use the APKMirror for getting the older version.

I like the APKMirror very much due to its advanced security measure and user-friendly experience.

For those who want to get the paid version of the Android apps and games for free, Ac Market is the best one. You can use the app for downloading all the paid apps and games for free and is also of very high quality. One thing which Ac Market lacks is the security, it is weak in case of security, but they scan all the app once at the time of upload.

One more thing that I would like to tell you is that Ac Market is relatively new, but it has all the apps that Play stores hosts and also provides other cool apps which are not on Play Store.

Amazon is one of the most popular and the highly recommended app out there which was established in the year 1998 and till now it got an excellent reputation. Amazon also provides an Appstore for the user of Android. If you have ever used the Amazon Fire devices, then you will see Amazon Appstore instead of the Google Play Store.

Amazon Appstore provides all the necessary apps and is incredible when we talk about the security. I also recommend this store if you want fantastic user experience.

However, Amazon Appstore is not ideal for those users who want to use a Play Store alternative due to lack of apps on GPS.

Who don’t know about the Opera browser it is one of the most popular browsers out there after Firefox and Chrome both for the Android and Windows.

Now Opera is also serving the user by providing the apps in their Mobile Store.

The user experience of Opera Mobile Store is excellent and is easy to use. It resembles Google Play Store, but it provides a lot of cool apps which Play store misses like Videoder.

My Friends, I hope you liked the list of the best play store alternatives. Now you can choose the one you love. However, if you have any question, then please don’t hesitate to ask me about it.