All of us love to play games; some like to play strategy game while some likes to play racing games everyone has his/her taste. Especially if you are an Android user, then you can find more games than the iOS devices like iPhone (Simply because the number of Android developers is more). More games mean more problems. I mean if you want to find the best addictive Android games that suite your taste, then you have to check a lot of games which will take your time and efforts.

But no worries, because here in this article, I will list the best and the most addictive Android games of the year 2018 and beyond, and I just hope you will like it. Not because these are the best picks selected by me. It’s because I have explored a lot of games in different categories and then chose the best one or the most popular ones.

And at the end, you will find the games which you will be playing all the time, and you will be passing you all leisure time in playing one of the addictive Android games listed below.

Before getting started, here I have one more surprise or say the gift for you, I have a super cool app known as AtoZ Downloader. You can find a lot of cool stuff like the APK files of almost all the Android apps & games.

So, without any delays let’s move on. 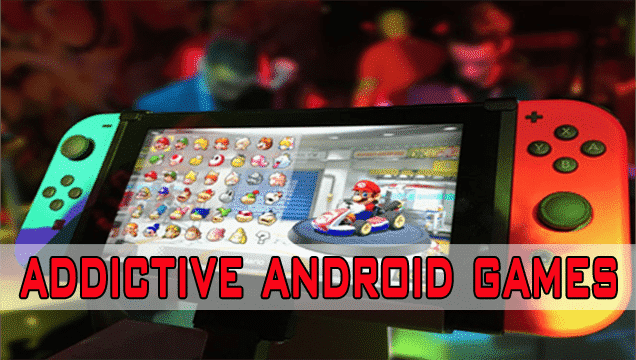 Pokémon Go was launched back in the year 2016, and at the time of its launch there was a lot of buzz for this game, everyone was just talking about this game. And this game also became very much famous in a short period, and till now it has well, Millions of Android and iOS users. That is why I am ranking this game in the very first position of our Most Addictive Android Games of 2018.

Well, if you ask about the theme of the game, then it is based on the Pokémon cartoons, which were cast on Television (These were my favourite cartoons when I was a child).

In short, Pokémon Go is a good game, and you will find it very addictive, but you have to spend a few minutes to understand how it works.

Clash of Clans is not a very recent game like the Pokémon Go but this game is also addictive, and you will find it the best time killer game if you want to pass your leisure time. If we discuss the category of this game, then it falls in the Strategy category, and a lot of users love to play strategy games.

Moreover, if you want to know the theme of the game then it is straightforward, we have to build an empire and then have to develop an army to protect it. Once our empire goes well the next thing we face is other big empires attack us. If you save yourself using good strategy, then you get points. Overall, cannot describe the game’s theme in words but you can believe me and can give it a try.

I don’t think there will be anyone who born in the nineteens and have not played the Super Mario game on the very first video game player. And the Super Mario Run is the extended and the rebuilt version of the same game, but it has more features and it is even more addictive because it has a beautiful interface backed by unique and high-quality graphics and music system. This game was also launched in the year 2016, and after launch, it got a huge success, and now it has become one of the most addictive games for Android and iOS users.

OK, now let’s discuss the games’ theme. The objective of the game is simple; you have to run and catch the coins, by jumping and have to pass the barriers and hurdles which are in the form of moving objects.

Minecraft is the best game I have played ever, but one thing which I want to clear is that it is a paid game, all the other games which I have mentioned above are free to download and install, and you don’t need to spend anything. But Minecraft is the only game of its type and is very expensive than regular apps, but you should give it a try if you are looking for the addictive games.

At the very beginning of 2009 when it was launched, it didn’t get much popularity, but gradually it became much popular and got a lot of exposure.

Let’s discuss the game’s working, here you have to build some parks, buildings, schools, Offices, hospitals or anything you want and this is how to play, it looks strange, but it is not.

Have you ever played Taken Three (formally known as Taken 3)? Taken 3 is the game which I used to play in the gaming room in my colony. And Shadow Fight 3 is just of the same type, but it is more versatile and addictive.
Shadow Fight 3 is a Role-Playing game in which we (shadow) have to fight with many fighters and have to win different fights to complete the goal (to be honest the goals are unlimited).

Before the Shadow Fight 3 its other version named “Shadow Fight 2” was trendy but after the launch of its’ third version people are rushing towards the 3rd addition which is even more addictive.

So, guys, these were my few picks for the best and the most addictive Android games. You may not like them, but the key is always to choose those games which you can play very well on your device, and your smartphone supports them. For instance, if you install a massive game which requires 2 GB of RAM (At least) and the latest version of Android, then your smartphone will start lagging.

By the way, I can now hope I have delivered something unusual and cool. If you have questions, then you can ask them in below comments.