Technical Side of USB Flash Drives

Unnoticed by consumers, the industry of USB flash drives or, more simply, flash drives, has evolved from a purely applied field to a fully-fledged independent sector of the modern computer market. It would seem that these changes should only be positive to users: a wide range for every taste and colour, constantly decreasing prices – what could be better?

But the modern consumer can’t get enough benefits: we always want more. That is why today a flash drive is not only a tool for recording or transferring data but also a device for mining cryptocurrencies, including the notorious Bitcoin. We can call it USB Miner.

Getting Cryptocurrency With a Flash Drive

At first, Bitcoin was mined only on computers but time flies and everything changes. When cryptocurrencies went up, a better method using a video card had been developed. Then there were programmable processors (FPGA), and later ASIC, specialized chips for solving exactly the type of tasks used in Bitcoin. In the middle of 2013, Block Erupter Sapphire appeared, the first device for mining in the format of USB flash drives like ones from LogoUSB. 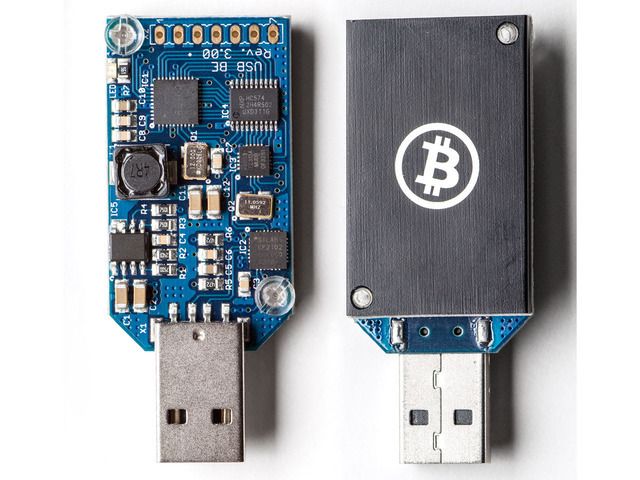 Mining Bitcoin With a Flash Drive

An ordinary Bitcoin miner built on an ASIC processor is a shoebox-sized device that consumes more electricity than ordinary computers. Usually, there are several motherboards with multiple processors in it, so the device is quite large, noisy, heavy, and very hot. Yes, it is cost effective, but it is not the only option: you can make a device the size of a USB flash drive, which can take one or two processors to mine cryptocurrency.

What Other Coins Can You Mine?

Using the USB miner, you currently can mine 13 types of coins based on the SHA-256 cryptographic algorithm – in particular, Bitcoin Cash, Peercoin and Namecoin. A complete list can be found on the CoinWarz website, and there is also a profitability calculator based on hashing speed and type of a coin.

USB miner does not need a unique energy source or even NET connection as it may be connected to absolutely any PC or laptop or even a tablet. They do not heat a lot, so they rarely need cooling, and they, in comparison with the ordinary, large miners, are completely silent (but not too effective, indeed). Due to its compact size, USB miners do not need to purchase server racks or invent any other storage systems.

In addition, they are very easy to transfer from place to place and cheap to be sent by mail. In general, they are inexpensive – on eBay, you can easily find a copy for $ 100, while ordinary miners cost tens and hundreds of times more.

Of course, nothing prevents to connect several USB miners to different ports of the computer or to a USB hub.

The main drawback of the USB miner is the relatively low hashing rate, since most of these devices have only one ASIC chip installed, and this is already outdated by now.

To gain the standard amount of power of ASIC device using USB miners, you will have to spend much more money.

When to Use the Devices?

Do not expect a noticeable profit from the USB miner – those days are gone. Economically, the choice of such a miner is not justified – if the price of Bitcoin does not soar (and it doesn’t), financial losses are almost always guaranteed. Even if it takes off, much more can be earned with the help of an ordinary ASICminer.

A USB miner is such a fun learning device with which you can get real skills without investing hundreds of dollars in equipment. Also with their help, it is convenient not only to learn but also to teach others.

A USB miner is great for experiments connected with overclocking (or, on the contrary, braking) ASIC chips – it’s better to burn a little case for $ 50 than a real big ASIC for one thousand dollars or more). Specialists advise using a USB hub of sufficient power exactly for overclocking.

More USB miners become collectable as if personifying the physical incarnation of Bitcoin and may serve as a reason to talk about the times when Bitcoin made the first steps.

Best Models on the Market

If you need a reasonably cheap USB miner because you want to use something to train on, you had better buy a used Block Erupter Sapphire on eBay and it’s worth the money. It calculates 333 million hashes per second. Even a new one costs about $ 35 on eBay and a used one is twice cheaper.

The Antminer U1 USB hash rate is higher – 1.6 Gh/s. The new device is sold for $ 33, and second-hand – for about $ 12.5, and, if we talk about economic efficiency, then, of course, it is much better than the ancient Sapphire.

Want to find something efficient if we talk about earnings? Maybe you are going to mine some altcoins based on SHA-256? In this case, our recommendation is GekkoScience 2Pac Stickminer. But the important thing is that you can’t earn Bitcoins with it.

Try a miner with a couple of Bitmain BM1384 chips – that is the same as Antminer S5. The miner works with a higher hash rate, of 15 Gh/s – the best result among USB miners for now.

2Pac costs about as much as Sapphire or U1, but its money value is higher because of the energy efficiency, so it’s a good option. If your aim is to achieve maximum speed, then you will have to adjust the characteristics of the device by hand – that is to be considered as well.

Nevertheless, Stickminer uses Bitmain microcircuits; it is produced by the manufacturer of amateur electronics GekkoScience. 2Pac is the successor to the GekkoScienceCompac, delivering 8 Gh/s performance.

2Pac can be purchased from a proven dealer or, possibly, from other dealers – they can be found on the manufacturer’s forum. Now the device costs $ 32. Moreover, you can buy it on Amazon and eBay.

Last year, several manufacturers of flashcards reported the release of models with a combination of USB and eSATA. This innovation is designed to provide a higher data transfer rate while maintaining the size of the device and the price of flash drives. Now the market has an impressive number of such solutions.

In conclusion, we once again would like to emphasize that the choice of any computer equipment must be approached thoroughly. This allows you to save a lot more resources – both money and your powers. Computer literacy will help you make a choice consciously. Always be aware of things and not succumb to empty advertising promises.